This past August, writers from around the globe descended on Green Bay Wisconsin like cops diving for an open box of donuts. In fact, they came in droves from as far away as Thailand and Germany to meet with law enforcement specialists at The Writers’ Police Academy. Their collective goal? To get the writing right. After all, when it comes to the technical stuff, the goal is to gain a level of authenticity that the reader doesn’t ever have to question. Readers expect a bit realism and accuracy when it comes to the details. They want the story to be believable. And, writers want to deliver it. For instance, the earlier cliche about cops and donuts is far from the truth. These days, law enforcement officials strive to stay in top-notch condition, not only to do their job well but to carry around an addition twenty pounds of gear (vest and duty belt).

The Writers’ Police Academy provided an experience like no other. Where

else can a wordsmith learn how to evaluate blood spatter or explore the use of explosives and IED’s. Or field strip and shoot a long gun, study a death scene, and learn the proper time to Mirandize a suspect?

As a debut author who is all about improving my writing, I’ve found the fine points of police procedure, legalese, forensics, and psychopathy are sometimes hard to get right. Research from behind the laptop only goes so far and it’s those little tidbits that make the story dynamic.

Based on what I learned at the academy I’ll admit mistakes were made in my first book. Hopefully, none that the average citizen would note. And yet, my goal will always be to get the minutiae right. Not only is it out of respect for those who do the job but I want fans to experience an adventure that reflects real life. This writer thing I’ve got a passion for is going to last awhile and I owe it to readers to improve where I can.

This event was law enforcement 101 on steroids.

The WPA’s wicked intense schedule is a one-stop shop that provides interactive, hands-on, professional instruction. And, much like Disneyworld, the offerings are so vast that it’s impossible to do everything in a single visit. I’m talking 42 classes offered over a 2-day period-Yikes! With all the group presentations, classes, guest speakers, and networking, my head was spinning by the end (good thing I took notes). The jam-packed days continued into the night with drone demos, traffic stops, and arrest protocol. I was particularly impressed with how patient and determined instructors were to ensure we left with a clear understanding of each subject. No question went unanswered.

Police procedure and crime scene investigation expert, author and consultant, Lee Lofland (of the Graveyard Shift Blog), is the driving force behind the academy. He and his team put together one heck of a training adventure. Here’s a look at just a few things I experienced that weekend. 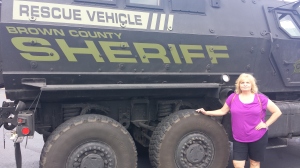 And, a few of the classes I participated in:

-Oneida Tribal Police and Native Gangs: This class was a gold mine of information on various gangs not only in Wisconsin but across the U.S.

-Examination of stereotypical motives for mass/serial murders and the psychological nuances behind specific cases. This was taught by renown author, instructor of forensic psychology, and lover of all things dark–Dr. Katherine Ramsland.

-Private Investigation: Or, how to be a dick for fun and profit. Great for my amateur sleuth protagonist. 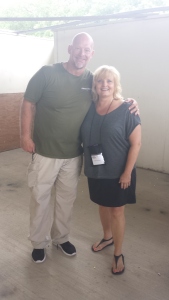 -Force on Force clearing of a building: When is deadly force necessary?  This class was a real eye-opener for me. I learned how officers are trained using reality-based tactical scenarios to evaluate and determine if deadly force is necessary. Gone are the days when trainees shoot at pop-up targets during training and then hesitate when confronted with the same shoot/don’t shoot scenario with a live person. An instant is all it takes to be right or wrong. I learned how this cutting-edge training better prepares officers for dangerous situations.

(Here I am with instructor Randy Clifton. Former Special Agent for the DEA and FBI Academy Instructor.)

As if the classes weren’t enough, one exciting part of the weekend were the surprise events that were planned for us.

When we arrived on campus Friday morning we witnessed a fatal head-on collision involving a drunk driver (simulated). This incident felt very real. Officials wore microphones so that we writers could hear the exchange as emergency personnel arrived and dealt with the events in real time. Responding officers evaluated the intoxicated driver, issuing a field sobriety test and subsequent arrest. Emergency medical personnel triaged the injured and extricated (using the jaws of life) a victim for medical transport on the Flight for Life helicopter. 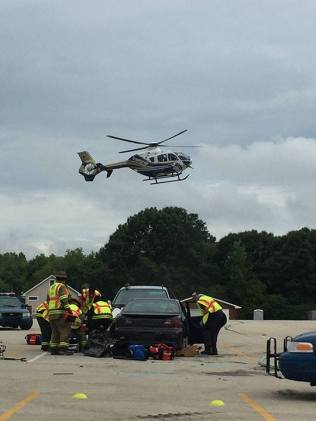 (Impressive acting by the guy in the orange shorts! He played dead as the entire scenario unfolded.)

We were in class early Saturday morning drinking coffee and covering terrorist statistics. For instance, Worldwide terrorist attacks in 2015 numbered 391. That number jumped dramatically to 759 in the first six months of 2016!  All of a sudden, we were under attack (simulated). Terrorists had come onto campus and staff was dealing with multiple stabbings while performing a lock-down in the lecture hall to keep us all safe. We all knew this was one of the WPA surprise simulations, but still. Not only did we get to hear staff in the room but critical responders as they made their way to us.

A lot was happening at once and it was tough to take notes with our hands on our heads. (I did manage to sneak a few photos with my cell). We were required to keep our hands on our heads until our non-involvement was established by officers. Afterward, instructors covered protocol for the response. 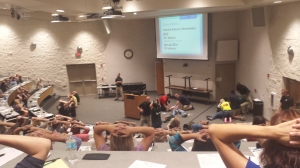 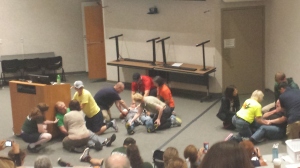 Lee Goldberg shared insights into his writer’s journey and words of wisdom on how to use or not use what we learned at the WPA. 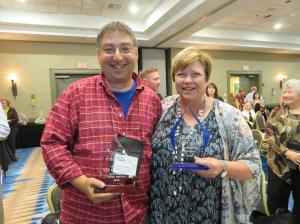 To top off the weekend (I know, you’re wondering how it could possibly get any better), Tami Hoag spoke about her panster writing process and how, often, she doesn’t know the ending until she’s there. She sports a tattoo that keeps her centered and has a love of mixed martial arts (and yes, she can lay you flat with one punch). She also shares a passion to the details right and attended classes that weekend. See, a writer never stops working on the craft.

The Writers’ Police Academy was an all around adventure I look forward to attending again and again. Thanks WPA for keeping it real!

The Writers’ Police Academy sign up is February 19th. Don’t miss out!